and if you live in the new york area, he often does readings around town.

My high school crush, David, and his wife Dorothy own a cool indie bookstore (Written Words) in Shelton Connecticut. They've been in business since 2007 and in those five years it's become a really nice community gathering spot offering local author signings and even knitting classes.

Now, with the economic downturn and the advent of e-readers, they're having a difficult time. I don't know if this is legal here or not, but if they've set up an indiegogo account (kinda like kickstarter) and if anyone is willing to put up even $5.00, it would be enormously appreciated. There are only four days left!

On behalf of David and Dorothy, I thank you.

Kaya Oakes resides in my pantheon of literary alterna-goddesses. She is an award-winning poet (Telegraph), author of Slanted and Enchanted: The Evolution of Indie Culture and teaches writing at the University of California, Berkeley. She was the co-founder and senior editor of Kitchen Sink magazine ---a wickedly hip publication that ran from 2002 – 2007 which featured saucy essays, interviews, reviews and noodlings on media, art and culture. 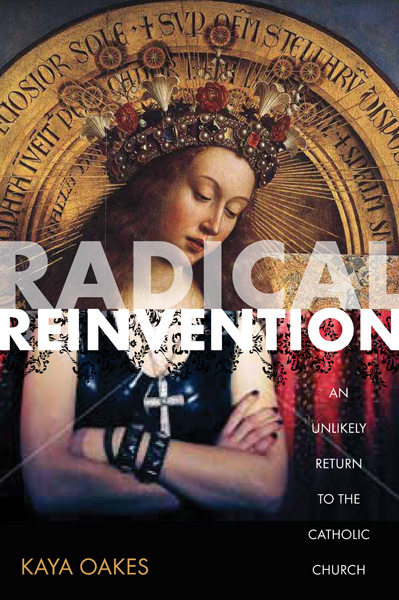 In her latest book, Radical Reinvention: An Unlikely Return to the Catholic Church, Oakes chronicles how a punk rock-loving, third wave feminist finds a spiritual home in a monolithic institution whose politics she opposes.

Oakes grew up in Oakland, California, where she bounced back and forth between Catholic and public schools in the 1970’s and 80’s. Her adolescent perception of the Catholic Church --- formed while doing a lot of eye-rolling --- was shaped by humorless nuns, the rock opera Jesus Christ Superstar, and the Church services her family attended which featured Vatican II reforms such as, “folk Mass,” liturgical dance, and occasional "reflections" by female parishioners.

As a preteen she viewed the Church as “clunky and dorky,” but secretly enjoyed the late night Masses served in candlelight. When she was a senior in high school, Oakes took a trip to Spain with her classmates. In Ávila, surrounded by medieval churches and baroque cathedrals, the only thing Oakes felt about her Catholic heritage was shame.

After high school, Oakes pursued creative writing and steeped herself in indie culture and leftist politics. Suffering from a “generational propensity for snark and cynicism” Oakes assumed that she was an atheist. But when she busted herself praying and making the sign of the cross whenever she saw a dead animal on the side of the road, she began to question her unbelief and realized she’d been faking atheism.

Tired of pretending she doesn’t believe in God, Oakes decides to fully confront the Church she left behind. She begins attending weekly catechism meetings at a liberal-leaning parish, gets confirmed, grits her teeth at the Vatican, hashes out her issues with Jesus, re-discovers some kick-ass women saints to pray to, helps her church feed the homeless, meets a group of progressive lesbians and ex-nuns who are fighting the Church from within, joins their “pray and bitch” group, researches original Hebrew texts, cracks open the essence of the gospel, is asked to give gospel reflections in the Church, becomes a budding theologian, and fights like hell for LGBTQ rights, reproductive freedom and radical inclusion.

This book made my heart leap, YESYESOHGODYES!

So, I just got back from the (used) book store with the following:

Any thoughts on which should go first?

Can anyone please recommend a book with the following storyline:

Some sort of detective travelling to a backwater place (becoming a big deal to locals subsequently) to investigate the mysterious things there. Something along the lines of The Sleepy Hollow (as it was in the movie) or maybe the Name of the Rose. The genre really doesn't matter: anything from cyberpunk mysteries to pseudo-medieval detective stories counts.

The books I know of so far:
-The Legend of Sleepy Hollow by Irving Washington (probably)
-The Name of the Rose by Umberto Eco
-The first two books about Witcher by Andrzej Sapkowski
-Sherlock Holmes constantly travels somewhere, as far as I remember. At least in The Hound of the Baskervilles
-Many books of Agatha Christie, probably

Is there something else?
Thanks for any suggestions!

///Many thanks for all the replies! Extremely useful ^__^

can anyone help me think of books that deal with the death of a father, in any way? it's for a story i'm writing. my mind's gone blank. anything with a dead/dying father as the main element of the plot would be great, as would anything like l'etranger which starts with a line about a dying parent.
thank you!!

I'm reading The Diary of Anaïs Nin Volume II: 1934-1939 right now and it's blowing my mind. I think Nin is my new hero. I'm reading this book so quickly that it's like she's narrating my thoughts. Snow Flower and the Secret Fan by Lisa See


Wow. This is such a powerful book! I really enjoyed reading about a different culture in past times. I found it harsh, but sometimes the past is harsh and we, as the world need to learn from the mistakes made and move on. I found Lily to be a girl (and then woman) of self-discovery and change. I was so sad to learn that she became a bit harsh towards Snow Flower, but was glad to see that she tried to make amends to Snow Flower's family once she passed away. There were a few parts in the beginning of the book that were slow, but overall, I thoroughly enjoyed it.

**If anyone wants to recommend any books about past Asian cultures (China, Japan, India, etc.), that would be WONDERFUL!

View all my reviews

More importantly, though, we're running a charity drive for Doctors Without Borders. Donate and you can win FORTHCOMING (yes, as in not yet released) books by Jeffrey Eugenides, Neal Stephenson, Ben Marcus Colson Whitehead, Cecil Castellucci, and Sara Zarr. You can also win the chance to be tuckerized (that is, become the namesake of characters) in the future books of Amanda Eyre Ward, Paul Tremblay, and Jean Kwok. There are also tons of prizes from Aimee Bender, Steve Almond, Katie Arnoldi, Matt Bell, Elizabeth Crane, Charles Bock, and plenty others.